Nearly 6,000 Churches in the UK Convert to Renewable Energy

According to several news sources, including BBC News, nearly 6,000 Christian and non-Anglican UK churches have committed to renewable energy in the fight against climate change.

Their faiths range anywhere from Catholic to Quaker to Salvation Army. Among them are some of the UK’s most famous cathedrals.

15 cathedrals have signed on for green electricity tariffs, paving the way for others to follow hopefully.

These cathedrals include Liverpool, Salisbury, St Albans, and York Minster. Also, thousands of churches are currently using 100% renewable energy. In fact, some churches are even generating their own clean, green energy.

According to CNBC, the Gloucester Cathedral installed 150 solar panels on their roof in 2016.

Christian Aid and Tearfund helped many churches make the conversion through their Big Church Switch campaign. Parishes are banding together to combine their buying power.

This collaborative power helps obtain low bulk-rates on energy and get the best possible tariffs.

Christian Aid has even stated that often-times the green electricity tariffs they negotiate are better deals than the fossil-fuel ones held prior.

“One of the great moral challenges of our time.”

The Church of England understands the dire necessity for widespread use of renewable energy. Religous leaders have called climate change “one of the great moral challenges of our time.”

In fact, The Church of England’s head environmental bishop, Nicholas Holtam, has publically stressed the importance of converting to renewable energy.

“Climate change is an enormous injustice and is hurting the poor first and worst. Switching to responsible sources of electricity may seem like a small thing on its own, but when joined together it can make a real difference.”

The Church of England still owns shares in fossil fuel companies, but they plan on selling all shares of companies who aren’t on track to meet the goals of the Paris Agreement. Additionally, they are urging the UK government to set a target to cut emissions entirely by 2050.

As the director of RenewableUK said, “Renewable energy is now a mainstream power source.” Let’s hope more organizations and businesses follow in the footsteps of these UK churches in the journey towards global renewable energy usage.

Invest in the Future. Invest in Solar.

In the transition to fully renewable energy, solar energy is a smart and attainable source of power. Solar energy reduces both energy use and consumer costs.

You can reduce your carbon footprint. Invest in the future.  Go green. Get clean. Save the environment and, consequently, your finances.

Take the first step in your path towards 2030 with renewable solar energy for your commercial property. 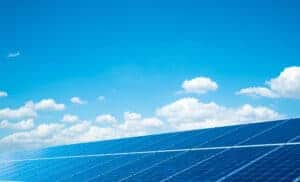